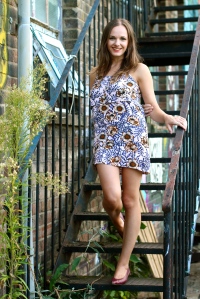 Grace Forell is a professional TV and Radio presenter based in London.

After graduating in 2013 from the UK’s leading Journalism MA at City University with a First, Grace joined Hoxton Radio as a presenter where she continues to host a show every Monday evening.

She has become a prominent Youtube blogger with The Eighty Sixth Floor – a London based production company which specialises in geek culture. When she’s not reporting at conventions or reviewing the latest sci-fi series, she’s making documentaries on the podcast industry or looking at Game of Thrones fandom.

In the last year she has presented the Arqiva radio awards coverage and co-hosted the Post Office NSA’s for Awards TV. She’s also a voiceover artist and has her own London food video blog, Foodie Fives, which is part of the Top 5 at 5 channel.

Born and bred in London, Grace is a regular on the London bar scene, and has DJ’d at various club nights and corporate events – specialising in Funk’n’Soul, Motown, Disco, Pop and Indie.

She’s also a trained actress, having studied at ArtsEd and later the Oxford School of Drama.

April 2016 – starred in a staff training video for itsu

May 2014 – present – presenter at The Eighty Sixth Floor

August 2013 – Presented ‘Murky Waters’, a documentary produced by Roberto Valussi and directed by Myriam Dijck, which is being screened at Countryside Live Festival 2013

December 2012 – Presented ‘Tithing Problems’, a documentary produced by George Coote and directed by Rhys Durham, which won best short documentary of the year at City University

To get in touch, email forellgrace@gmail.com